Deprecated: The called constructor method for WP_Widget in EV_Widget_Entry_Views is deprecated since version 4.3.0! Use __construct() instead. in /home/tce2bshzhca5/public_html/wp-includes/functions.php on line 4872
 It’s no longer going to be hide and seek, if we have to go across LoC, we will: General Bipin Rawat – Defence Reporter 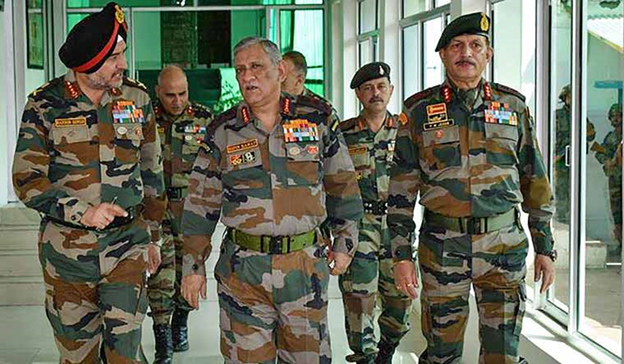 Pakistan has reactivated the Balakot terror facility but Army chief General Bipin Rawat tells TOI India is very clear that it will not allow Pakistan to vitiate the atmosphere in J&K any longer. Excerpts:

The JeM facility in Balakot has been reactivated. Intelligence assessments say there are 250, 300 or 500 terrorists waiting to infiltrate into India. If so, what did the Balakot air strikes in February, or the surgical strikes in September 2016 achieve?

The strikes have delivered the message that the Line of Control (LoC) will remain sacrosanct as long as the other side remains quiet and does not vitiate the atmosphere. Pakistan controls the terrorists, who act as its proxies. It’s no longer going to be hide and seek. If we have to go across, we will, through the air or the ground route or both. The red line has been very clearly drawn as to what will be the future course of action.

What is your assessment of the terror infrastructure in Pakistan in terms of camps and support from the ISI-Pak army combine?

It’s intact. They kept on saying we don’t support terrorists despite India giving them so much evidence. Now, after August 5 ( nullification of Article 370 ), haven’t they openly said let’s go for jihad in Kashmir. It’s a tacit acceptance of their support to terrorism in J&K. You cannot develop this kind of a machinery to spread terrorism overnight… It was always there. There are terror training camps in Pakistan, though they keep on shifting them. Fighting a proxy war with us is the state policy of Pakistan.

Pakistan often threatens the use of nuclear weapons, with PM Imran Khan raising the prospect of a nuclear conflagration at UNGA.

Nuclear weapons are weapons of deterrence. They are not weapons for war fighting. I find it difficult to comprehend when someone proclaims he will use them for conventional war fighting or if he is attacked. Will the world community ever allow you to use nuclear weapons like this? Pakistan’s statements show an inappropriate understanding of the employment of strategic weapons.

What about the situation along the LoC and IB?

There has been a step-up in infiltration attempts after August 5. There is currently a leadership void among terror outfits in the Valley. Pakistan is desperate to send some people across to instigate youngsters to spread violence again. But we are ensuring terrorists are not able to come into our territory by targeting any suspicious movement or reconnaissance mission on the other side of the LoC through shelling. Our aim is to prevent infiltration to ensure Kashmir remains peaceful.

There is apprehension the situation will explode in Kashmir after the ongoing security clampdown and communication blockade is lifted?

A large number of people in J&K have come to realise that what happened has happened for the good. There is, of course, another section trying to create propaganda that the rights of Kashmiris have been taken away. If the people analyse carefully, understand the pros and cons, they will find they have gained much more and hardly lost anything. They are still Kashmiris, they are still residents of J&K. They can come to other parts of India and continue to do what they were doing. Kashmiri students are studying in different parts of the country. They have freedom of movement. Similarly, why should people from other parts of India not have freedom of movement and anything else that goes with it?

What is this clampdown? Has anybody been told to stay confined to his house? Has somebody debarred students from going to schools? Have schools been closed? Have security forces opened fire? As I keep on saying, people are coming out and working in orchards.

But there are reports of thousands of youths being detained in Kashmir.

It is like this. Some people were being detained if they were violating Section 144 (unlawful assembly), throwing stones, indulging in arson, putting up posters to threaten apple growers and others. They were trying to vitiate the atmosphere and disrupt the government’s efforts — like the procurement of apples through Nafed — to ensure people don’t suffer economically.

Actually, the clampdown is being forced by the other side, not by the security forces. The security forces are only trying to ensure that people don’t come out in numbers and resort to arson, looting and violence. Many of those detained have been released after being checked by the police. Source: TNN