Deprecated: The called constructor method for WP_Widget in EV_Widget_Entry_Views is deprecated since version 4.3.0! Use __construct() instead. in /home/tce2bshzhca5/public_html/wp-includes/functions.php on line 4872
 Tensions in South China sea turning to chaos – Defence Reporter 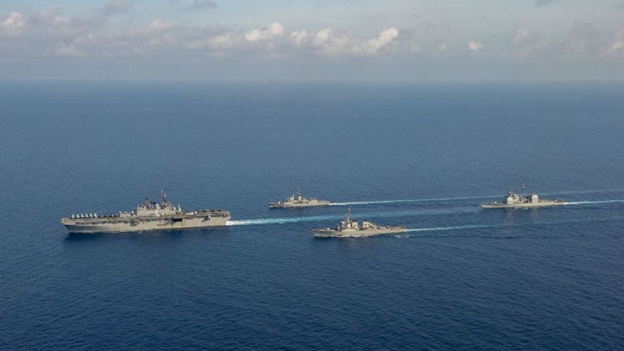 The USS America, a new amphibious assault ship, is now patrolling in the South China Sea with another US cruiser, a US destroyer and an Australian destroyer.

They are operating near where a Chinese research vessel backed by Chinese Coast Guard ships is in a standoff with Malaysian ships. The Malaysians object to the Chinese being inside their Exclusive Economic Zone, which China claims as its own, along with most of the South China Sea.

China has recently been pushing its presence in the energy-rich waters while other claimants are preoccupied with tackling the new coronavirus pandemic. On Saturday China said that it has established an administrative district on the Paracel islands and another on the Spratly islands. The two districts are under the control of China’s Sansha city, according to China Global Television Network.

“The establishment of the so-called Sansha City and related activities seriously violated Vietnam’s sovereignty,” Vietnam’s Foreign Ministry spokeswoman Le Thi Thu Hang said in a statement. China and Vietnam have for years been at loggerheads over the potentially energy-rich waters, called the East Sea by Vietnam.

Vietnam was closely monitoring activity in the South China Sea, its Ministry of Foreign Affairs said.

Democratically ruled Taiwan, claimed by China as its territory, has complained of an increased Chinese military presence near the island in the past few weeks, and has told China is should be concentrating on fighting the new coronavirus rather than menacing the island.

Taiwan’s Defense Ministry said the Liaoning, China’s first operational aircraft carrier, and five accompanying warships passed first through the Miyako Strait, located between Japan’s islands of Miyako and Okinawa, to the northeast of Taiwan on 11th April 2020. Taiwan’s armed forces monitored the carrier group’s progress throughout and “completed relevant actions in response to ensure national security and protect regional peace and stability,” it added, without elaborating.

In late December, shortly before presidential and parliamentary elections in Taiwan, China’s newest aircraft carrier, the Shandong, sailed through the sensitive Taiwan Strait, a move condemned by Taiwan as attempted intimidation.

Thitu — known as Pag-asa (“Hope Island”) in the Tagalog language of the Filipinos who inhabit it — has become an object of desire in the increasingly contentious geopolitical dispute involving the Philippines, China and four of their Pacific Rim neighbors: Brunei, Malaysia, Taiwan and Vietnam. The island and its residents are increasingly vulnerable to China’s vast ambitions across the entire South China Sea.

Roughly 390 km from Palawan, the westernmost major island in the Philippines, Thitu has three things most of the Spratlys lack: fresh water; a year-round population; and a crumbling concrete airfield about 1,120 meters long.

Starting in 2014, China began a land reclamation project 25 km to Thitu’s south at Subi Reef. The Subi development, like half a dozen other Chinese constructions in the South China Sea, is a forward position in Beijing’s effort to control all the waters up to 1,930 km off its southeastern shores, to what it has long referred to as the “Nine-Dash Line” in the Pacific.

China has become increasingly aggressive in the Spratlys. Three years ago, satellite photos, showed a flotilla of five Chinese fishing ships, coast guard vessels and frigates of the People’s Liberation Army-Navy within 5 nautical miles of Thitu island, the second-largest of the chain of reefs, shoals and atolls in South China Sea. Thitu is a sunbaked 37-hectare rock, dotted with scruffy trees and long-abandoned military bunkers, eking out existence just a few feet above high tide.

Despite the rival views of Vietnam, the Philippines, Malaysia and others, Beijing has repeatedly asserted its claim to about 90 per cent of the sea, which is one of the world’s busiest trade routes and has huge geopolitical significance.

Over the past six years, it has sought to bolster that claim by creating several artificial islands and developing infrastructure for possible military use, much to the consternation of the international community.

While it is perfectly acceptable for countries and marine scientists to give names to geographical features, the UN Convention on the Law of the Sea states that nations cannot claim sovereignty over an underwater feature unless it is within 12 nautical miles of a land feature.

The 80 topographical formations identified by Beijing over the weekend comprised 10 sandbars and two small reefs in the Paracel Island chain that were previously unnamed, 13 smaller reefs, described as “features”, around West Reef, which is currently occupied by Vietnam, and 55 underwater features spread across the South China Sea.