Deprecated: The called constructor method for WP_Widget in EV_Widget_Entry_Views is deprecated since version 4.3.0! Use __construct() instead. in /home/tce2bshzhca5/public_html/wp-includes/functions.php on line 4870
 IAF Depot In Chandigarh To Overhaul Engines Of Russian-Made Choppers – Defence Reporter 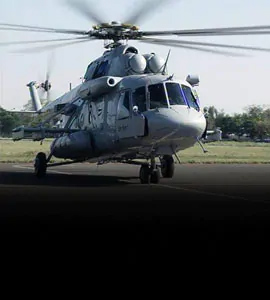 The Indian Air Force 3 Base Repair Depot in Chandigarh has been given the responsibility of establishing repair and overhaul technology of VK-2500 engines of Medium Lift Helicopters, a senior IAF official said today.

Overhaul in India of VK-2500 aero-engines will gradually reduce the burden on the exchequer and move forward towards the depot’s commitment of self-reliance under ‘Make in India’ mission, he said.

In commemoration of the 87th Air Force Day next month, the media was briefed about the achievements and indigenisation projects of the depot.

The 3BRD of the IAF was established in February 1962, and its role was basically to overhaul and repair Russian transport aircraft, helicopters, their aero-engines and aggregates.

The depot undertook extensive repair, overhaul and rendered spares support to all the war-waging machinery and ensured highest serviceability to support the wars of 1965 and 1971.

The depot initially undertook repair and overhaul of AN-12, IL-14 aircraft, Mi-14 helicopters, its engines and aggregates.

During 1980, overhauling of Mi-8 helicopters, TV-2 aero-engines and VR-8 MGB commenced. In 1991, the depot graduated to the task of overhauling the Mi-17 helicopters together with overhauls of AI-20D engines, propellers of AN-32 aircraft.

The engineering functions of the depot are to support and sustain all Mi series helicopters and aero engines of AN-32 aircraft, Mr Ghuratia said.

It also undertakes the apprentice training programme as part of “Skill India” initiative, he said.

“Be it peace or war or other tasks in service of the nation, the Russian helicopter fleet is doing a great service. We have such a large number of these helicopters flying in Indian skies that they need to be maintained well and overhauled regularly so that they are available for a task at a very short notice.”

“And this credit goes to 3BRD, where we have been given technology by Russians to maintain, overhaul and do major repair of these machines and its major components,” he said.

“In every operation what the IAF does, major support comes from 3BRD,” he added.

He also said under ‘Make in India’ initiative, a lot of impetus is given to indigenisation.

“The IAF wants to do modernisation through indigenisation, that means over a period of time we want to stop the reliance which is on the foreign resources and we want to make our country self-reliant,” the IAF officer said.

“In this area, Base Repair Depots of the IAF around the country are doing a very good job because we are handling directly the overall technology which is the most challenging and complex in nature..,” he said.

About training programmes for its personnel, the IAF officer said, “For some of the areas, we are trying to adopt new technologies like virtual reality for training our people. In another few years, we will be equipped with the best training facilities and infrastructure matching with any other professional organisation in the world.”