Deprecated: The called constructor method for WP_Widget in EV_Widget_Entry_Views is deprecated since version 4.3.0! Use __construct() instead. in /home/tce2bshzhca5/public_html/wp-includes/functions.php on line 4870
 PVC. MAJOR SHAITAN SINGH and THE BATTLE OF REZANGLA – Defence Reporter 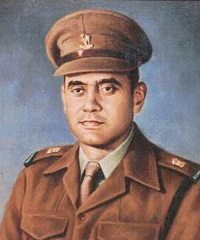 The citation for the Param Vir Chakra awarded to him reads:

Major Shaitan Singh was commanding a company of an infantry battalion deployed at Rezang La in the Chusul sector at a height of about 17,000 feet. The locality was isolated from the main defended sector and consisted of five platoon-defended position. On 18 November 1962, the Chinese forces subjected the company position to heavy artillery, mortar and small arms fire and attacked it in overwhelming strength in several successive waves. Against heavy odds, our troops beat back successive waves of enemy attack. During the action, Major Shaitan Singh dominated the scene of operations and moved at great personal risk from one platoon post to another sustaining the morale of his hard-pressed platoon posts. While doing so he was seriously wounded but continued to encourage and lead his men, who, following his brave example fought gallantly and inflicted heavy casualties on the enemy. For every man lost to us, the enemy lost four or five. When Major Shaitan Singh fell disabled by wounds in his arms and abdomen, his men tried to evacuate him but they came under heavy machine-gun fire. Major Shaitan Singh then ordered his men to leave him to his fate in order to save their lives.